The artwork inspired by the oldest known rum in the world........The Art That Made Us Festival featuring Chris Day | BBC Rewind Feature

UNDER THE INFLUENCE
Under the Influence is an artwork made by the contemporary glass-blower, Chris Day. The work is a series of 28 bottles made of coloured glass, bound by copper wire and braided rope, that formed part of a 2021 exhibition at Harewood House in Leeds.

We're going to learn about how this emotive artwork is inspired by Harewood House's uncomfortable links to the transatlantic slave trade and a surprising find of the oldest known rum in the world locked in its cellars.

Caitlin Wall and Rebecca Burton from Harewood House Trust look at the story behind Day's installation, and reflect on what the art says about the history of Britain and of Harewood House itself.

This article was produced for Art That Made Us Festival a collaboration between the BBC and UK museums, libraries, archives and galleries.


A TRADE IN HUMAN LIVES

The story begins in the Caribbean during the 17th Century where significant fortunes were being made by European merchants from the transatlantic slave trade, write Wall and Burton.

This involved the systematic enslavement and transportation of millions of African people across the Atlantic Ocean. People were bought and sold, with the aim of exploiting their labour to produce goods for the luxury market, such as sugar, rum, cotton and tobacco.

Involvement in the trade in enslaved Africans was rife throughout British society. It was a practice that was rarely questioned and one that formed the foundations of many national organisations that still exist today.

During the early 18th Century, the British merchant Henry Lascelles set out to control all aspects of the sugar trade.

He was a customs collector and a banker to plantation owners. He also owned slaving ships, which were used to transport enslaved Africans to the Caribbean, as well as sugar distribution warehouses in London.

In time, he also acquired sugar plantations, along with their enslaved populations. By the mid-18th Century, the profits from the sugar trade made Henry one of the wealthiest men in England.

Henry’s son, Edwin Lascelles, was born in Barbados. He eventually owned or managed 24 Caribbean plantations and with them over 3,000 enslaved individuals, write Wall and Burton.

Some of their names were recorded in inventories, documenting their gender, age, health and the type of labour enforced upon them.

Edwin inherited his father’s fortune and used some of it to build Harewood House.

(the image below shows part of the schedule from 1787 relating to a legal release and sale document between Henry Frere and Edwin Lascelles, detailing a list of enslaved people.) 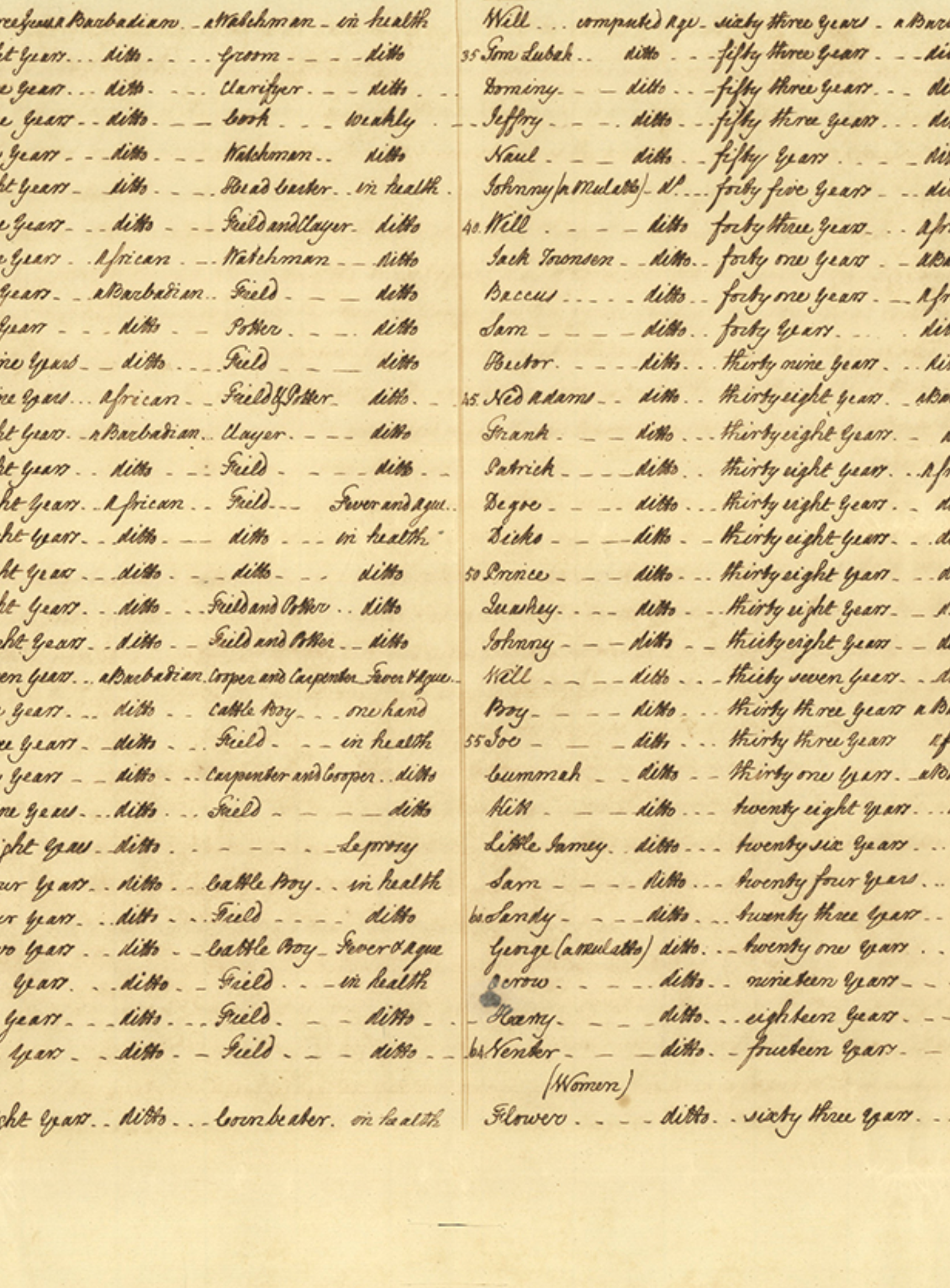 Fast-forward almost 250 years to 2011, when mysterious bottles were found in the dark cellars of Harewood House, covered in thick layers of dust.

On further inspection, it was discovered that these bottles were filled with rum estimated to be more than 200 years old.

The rum was made by enslaved Africans, a by-product of the sugar grown and processed on the Lascelles family’s plantations in the Caribbean. 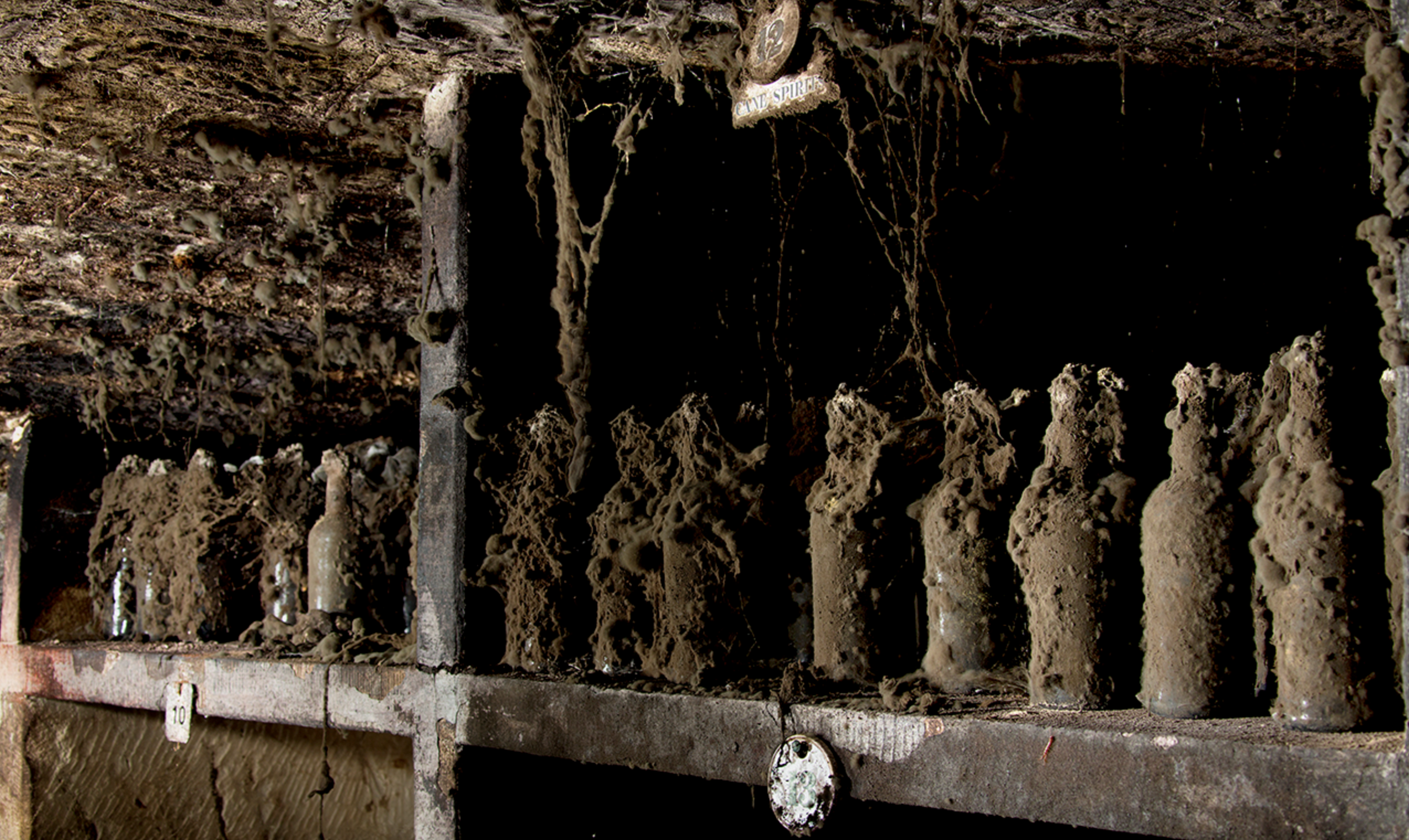 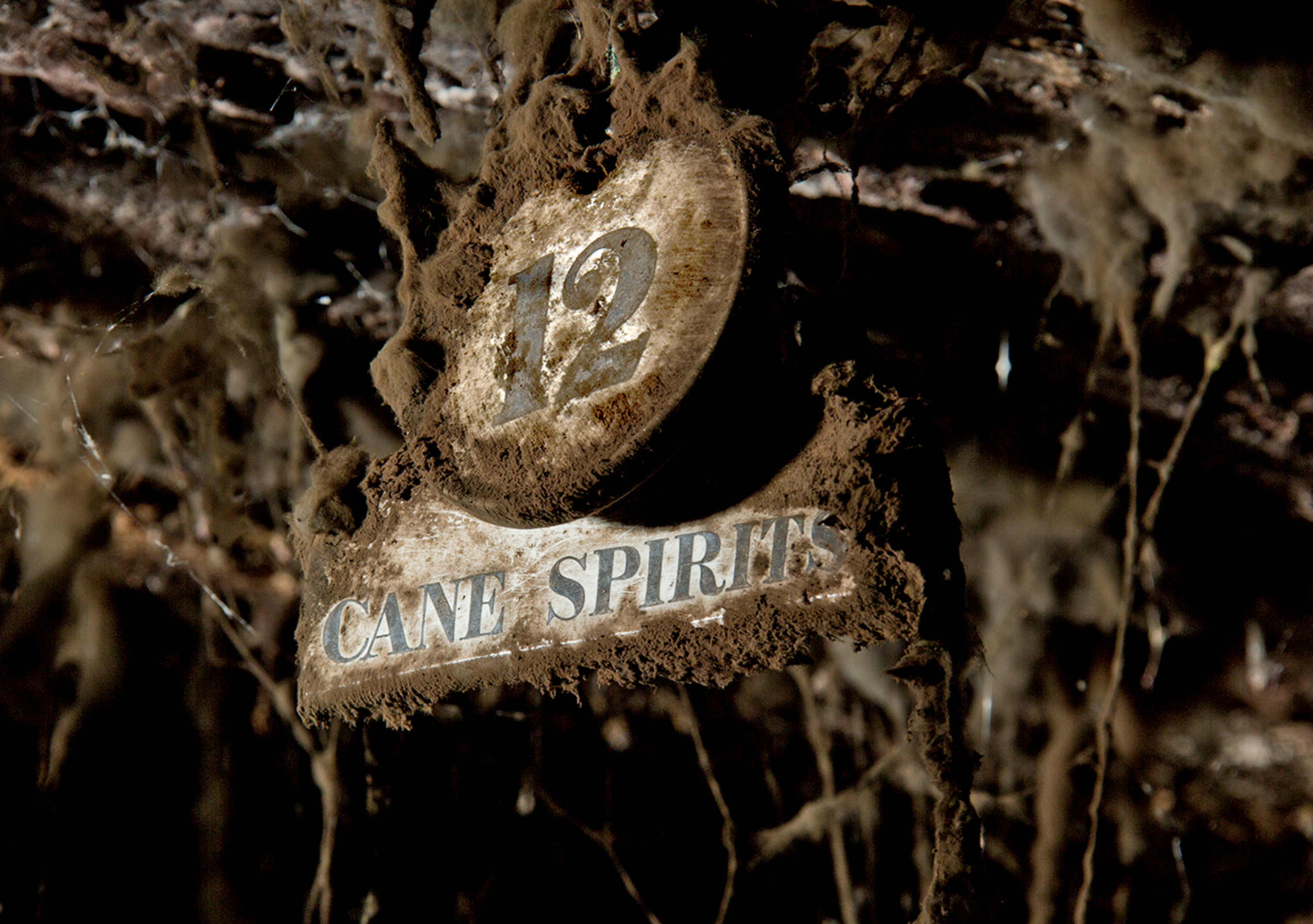 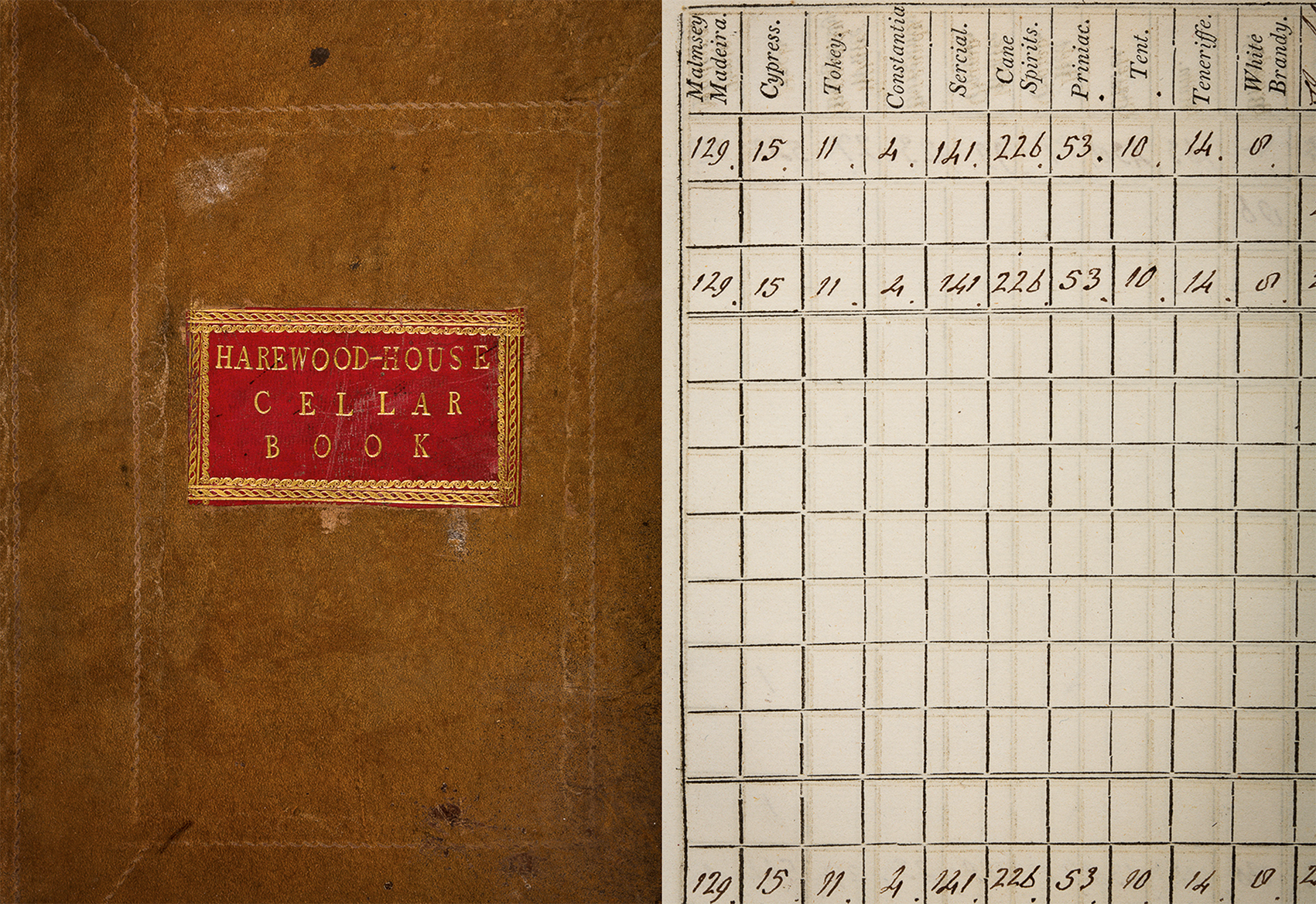 All proceeds were donated to the Geraldine Connor Foundation, a charity which aims to bring young people together through arts and culture. 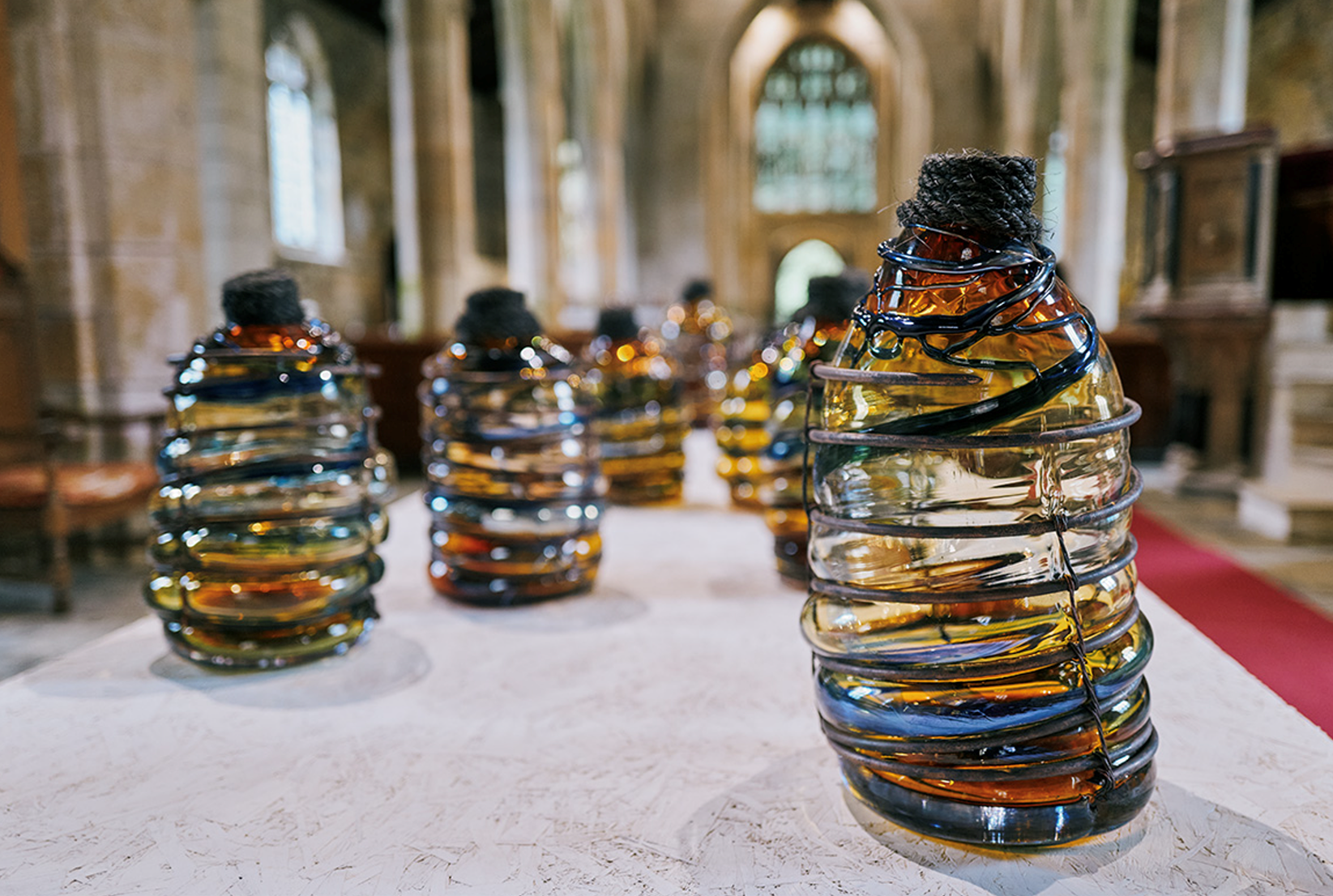 Photo: Under the Influence by Chris Day at the Craft Spotlight exhibition by Tom Arber
CHRIS DAY AT HAREWOOD

In 2021, 10 years after the discovery of the Harewood rum, Chris Day's art featured in Harewood House Trust's inaugural Craft Spotlight exhibition, Wall and Burton explain. The Craft Spotlight programme is "designed to provide a platform for emerging artists and makers of diverse ethnicities".

A recent graduate from Wolverhampton University, Day is a plumbing and heating engineer by trade and uses materials often found in both heating and electrical systems. His work aims to open conversations around Black history, drawing the viewer in by contrasting the beauty of glass with the traumatic histories his work refers to.

Despite having first learned about the Harewood rum during his studies, Day re-discovered the story while visiting the House in preparation for his Craft Spotlight exhibition. He responded by creating Under the Influence, making it the focal point of his 2021 show.

"I’ve named the piece Under the Influence because at that time, everybody was under the influence of the slave trade... Enslaved people were a commodity and they were bought and traded as if it was ok to do that." Chris Day

Under the Influence represents the 28 bottles of rum sold at auction. Each piece embodies the hundreds of enslaved individuals who laboured to create each bottle's contents, write Wall and Burton.

The bottles are formed of a bulging glass core bound by coils of copper wire and braided rope, evoking the caged and chained human bodies of the enslaved, always striving to break free. Trails of swirling blue glass reference the waves of the Atlantic Ocean and tortuous middle passage.

Each bottle is surprisingly heavy reflecting the enduring legacy of the history it embodies. 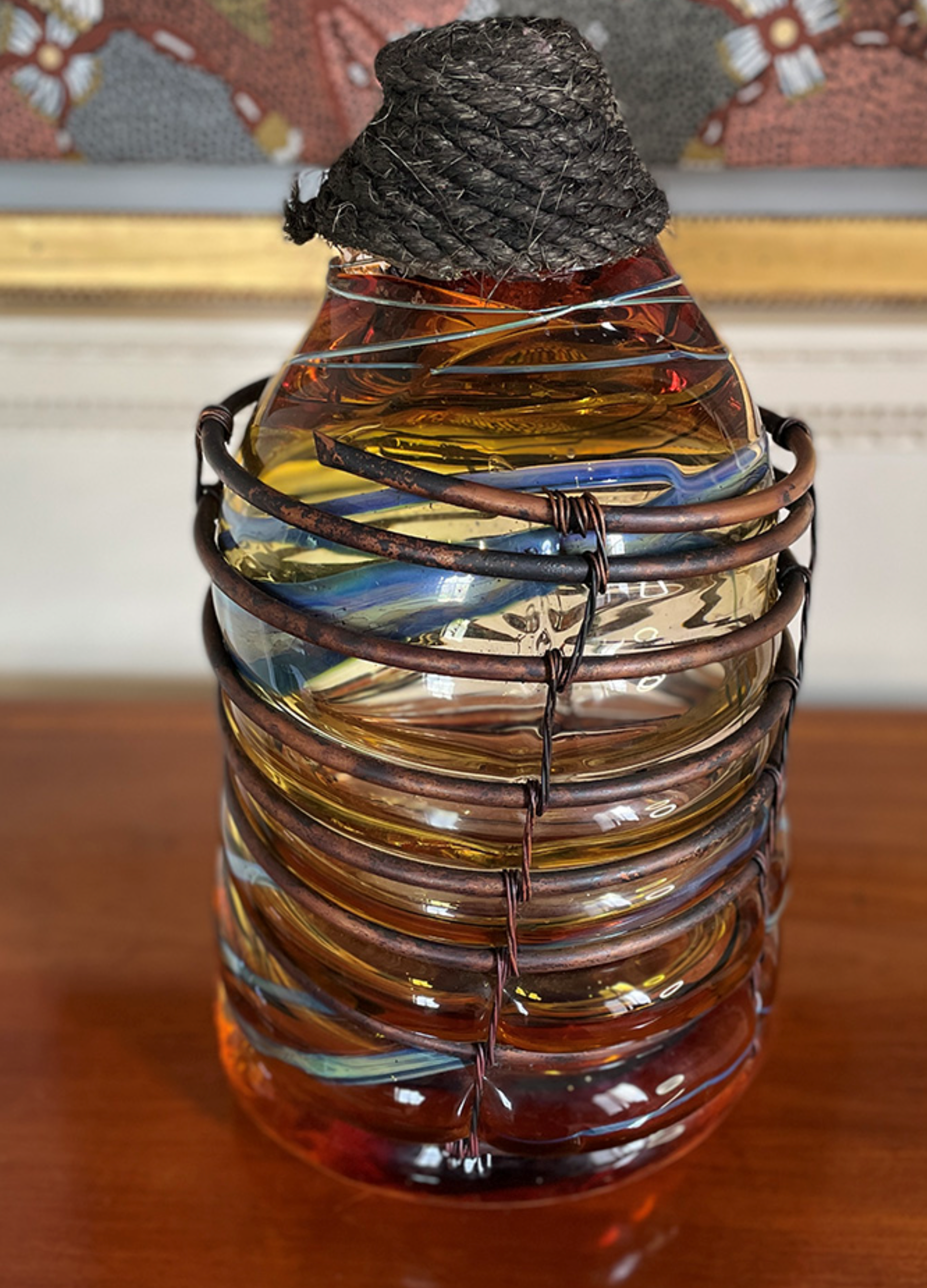 For more than 25 years, explain Wall and Burton, the Trust and the Lascelles family have sought to engage with Harewood's colonial legacy in creative and meaningful ways.

A bottle from Under the Influence was generously gifted to Harewood House Trust by Chris Day following his exhibition. It enters the House’s permanent collection to continue encouraging conversations about its links to the transatlantic slave trade.