In three wooden crates, tea-stained and stencilled with the words “Property of British Sugar,” lie a dozen black glass bubbles, knobbly and roughly formed but polished to a silver sheen. Wrapped around them are copper wires. Some half-squashed white glass rings have been scattered on top of them. The title of this piece, Commodity Triptych (2020), is almost unnecessary. It is disquietingly easy to see how the black glass spheres represent human heads with knots of hair and swollen flesh, crammed into boxes, as African captives would once have been below the decks of the slave ships. The wires cut into the glass, like shackles biting into human flesh. The rings symbolise the sugar for which the slaves were traded as well as the oppression of the captured Africans by their white masters. It is a strange work in which the beauty of the silvered surfaces of the glass captivates the eye so that you cannot help but stare in horror at its evocation of suffering.

The idea that his sculptures should both entice and disturb the viewer is precisely what British artist Chris Day is aiming for. He sees himself as a “storyteller in glass” whose works are designed to start “polite conversations” with their audience about the emotionally charged stories they tell: of slavery, racial violence, and the taboos around being, like himself, of mixed-race descent. It is striking how, in Day’s works, the combination of glass, wire, wood, and other media is used to such expressive, even narrative effect. He clearly has an unusual sympathy with his materials.

This is shown by the work which first brought him recognition: Strange Fruit (2018), an installation of globules of dark glass dripping through wire cages, suspended on nooses tied at the other end to a row of meat hooks. It is designed to evoke the lynchings described in the title song, in particular the victims’ “bulging eyes” and “burning flesh.”

Strange Fruit attracted the attention of Angel Monzon, creative director at Vessel Gallery and one of the judges at the British Glass Biennale 2019, which Day had entered in the student category. When he heard the story behind the work, says Monzon, it made him “want to cry.” Despite Day’s inexperience—he had only been blowing glass since 2016—Monzon soon agreed to represent him at Vessel. Last October, he hosted Day’s first solo show, “Blown, Bound and Bold.”

Day’s sculptures stand out for their raw, emotive power. “He’s touching on very nasty, dark, brutalised themes which people don’t often talk about,” says Max Stewart, lecturer in glass at the Wolverhampton School of Art, where Day is studying for an MA. “That has not been seen before from many artists …  in glass, he’s the only one,” at least in Britain. 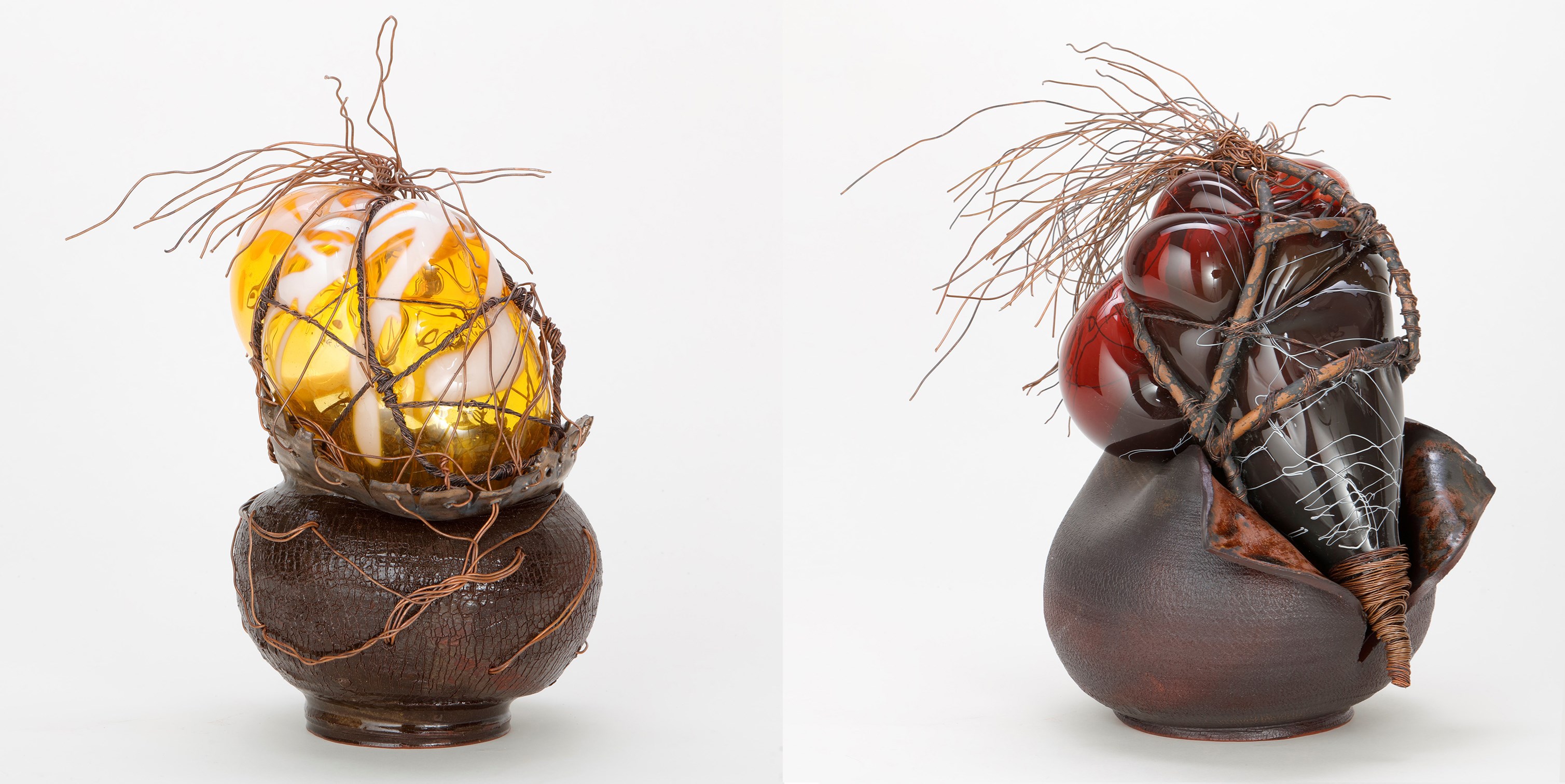 Transcending Bondage (2019) provides another illustration of Day’s use of materials to create a narrative. A balloon of dark red glass resembling a human head emerges from a dark brown ceramic shell and bulges through a tight copper cage reminiscent of a medieval torture mask. A mass of thin wires evoking hair are wound over the top. A pattern of thin white threads over the surface of the glass may suggest the marks of ownership. The work’s shape echoes both a West African mask and the outline of the whole continent. Its realisation demonstrates Day’s high degree of hand-eye-brain coordination and, as Stewart puts it, “the ability to manipulate an object exactly the way you want it.”

The story of how, after only five years of glassblowing and at the ripe age of 52, Day has found a foothold in the rarefied world of a London gallery like Vessel is almost as unusual as his works themselves. He grew up in public housing in Chaddesden, Derby, a deprived and predominantly white area of the British Midlands. In 1968, when his Anglo-Irish mother’s relatives found out that she was pregnant with him by a Jamaican man, they found the only other Black man in the area and beat him up. His father disappeared, and Day was raised by his mother and stepfather, who was also white. It was not until he went to elementary school that he discovered he was different. “People were saying, Why is your mum and dad white, and you’re Black? Are you adopted?”

From a young age, Day was good with his hands. He loved drawing and painting as well as metalwork and used to buy up old Vespas and refit them. But he was never academic; in fact, he had dyslexia, but was not diagnosed at the time. In retrospect, he wishes he had gone to art college, but there was no one to encourage him. Instead, he left school at 16 and began working in a department store, arranging the mannequins in the windows. From there he moved to a biscuit factory, where he discovered a talent for engineering. Now married with three children, he resides in Lichfield, Birmingham, where he runs his own business as a plumber and heating engineer.

When Day had a midlife crisis a few years ago, his wife suggested he go to an open day at Wolverhampton. After much prevarication, he enrolled on their BA in Glass and Ceramics, starting in 2016. The whole family had to make sacrifices. Day was at school three days a week, getting there at 7 in the morning and not leaving till late at night. The remaining four days he continued working as a plumber. “It was hard, financially and mentally, for my wife and children.” As for his loyal clients, “most of them have got a piece of my work on their mantelpieces.” Both Monzon and Stewart speak of his tenacity and focus, which enabled him to swiftly develop a rapport with his materials and produce a body of work that was impressively large for an undergraduate.

Making art has been a way for Day to come to terms with his identity. He had only a general idea of Black history before he started his degree. “I’m embarrassed not to know more than what I did,” he says. “But once I did start researching it … I just wanted to carry on learning more and more.”

As part of his MA, Day created Imposter Syndrome (2020), which he describes as “putting my heart on my sleeve.” The work’s focal point is a long copper blowpipe, standing upright, with a half-formed gather within a copper cage almost impossibly balanced on top. Once again, Day has used the motif of glass that is trying to expand against metal, this time to evoke his personal feelings of fragility and his struggles against the constraints of his upbringing. The pipe rests on a heavy piece of bronze slag that he found on the floor of the school’s casting foundry. Thin electrical wires stretch from the slag to the pipe’s neck in a radial pattern. The wires represent the artist’s DNA, which he traces back to Africa. The discarded slag represents his feeling of being “thrown away by society because I didn’t quite fit in.” Along with Socially Isolated (2020) and Anomic (2020), which have similar forms, Imposter Syndrome is a stark, almost talismanic piece, not conventionally pretty but mesmerising. Monzon describes them as “ugly-beautiful.” 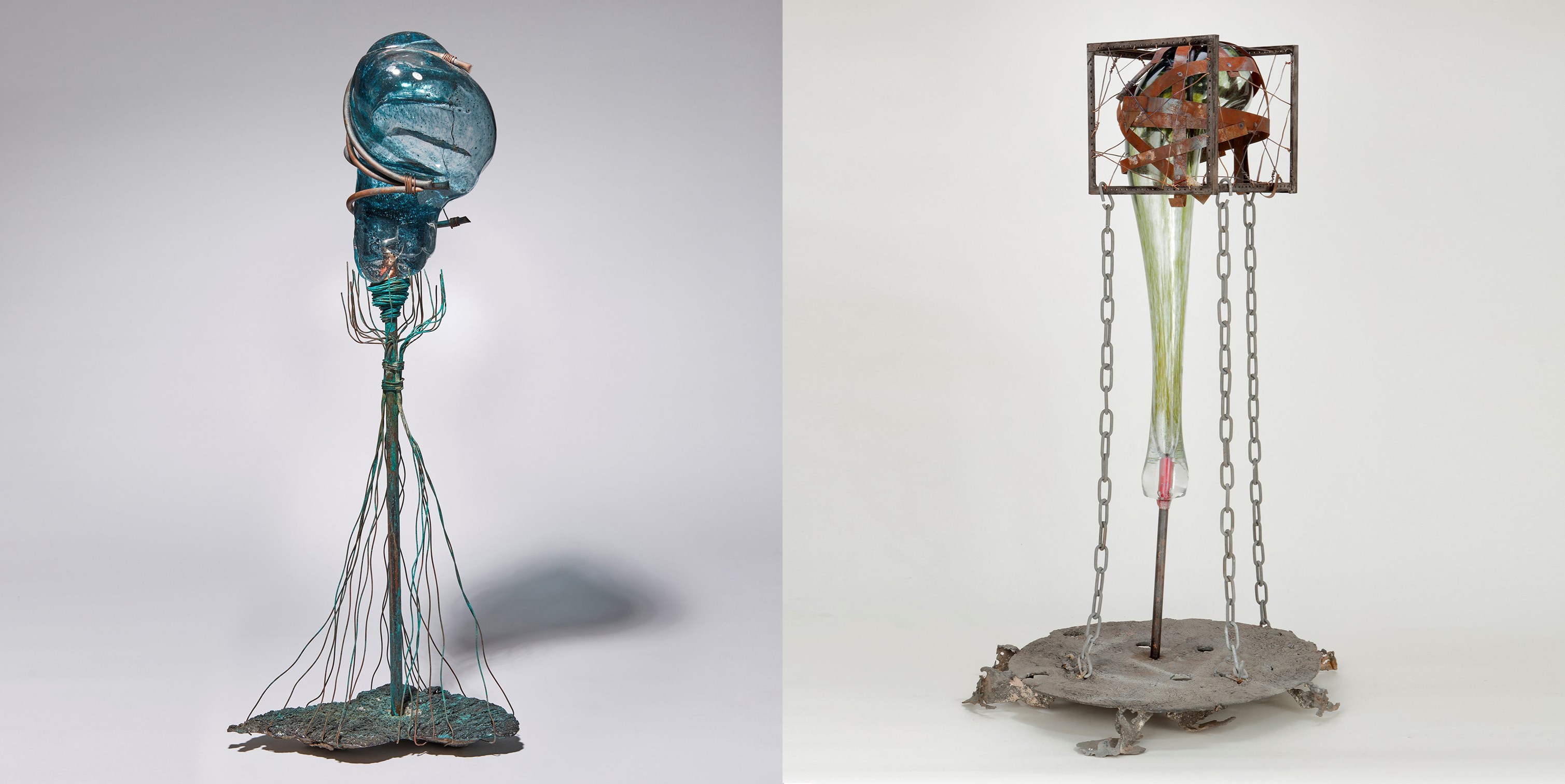 Monzon was just starting to plan Day’s show when the pandemic struck, followed soon by the Black Lives Matter movement. The latter had the side effect of giving Day’s work unexpected publicity, attracting interviews from the BBC and the Guardian newspaper. “Six months ago, I was a nobody,” he tells me; now he has had a moment in the limelight. Despite this, Monzon has not yet recouped the investment he made in Day—but he is committed. “We have a relationship and a history … and we felt like he’s exceptional.” And the relationship might be starting to pay off: eight works have been sold to private collectors, and museums on both sides of the Atlantic have been making enquiries.

Day would be the first to admit that he still has much to learn in terms of both technique and conceptualization. His ability to build on the momentum from BLM, and develop as an artist, will depend on how well he, like others, can weather the cycle of lockdowns. It is a good sign that he is already planning a joint exhibition, with stained-glass artist Grace Ayson, to coincide with the British Glass Biennale 2022. In the long term, he dreams of establishing a community-based glass and ceramics studio for artists from underprivileged backgrounds. He wants to give them the “hand up” that he has never had and expose them to an art form that would otherwise be prohibitively expensive.

What value does Day find in glassmaking that he would like to pass on to others? After a career in plumbing, where an ill-fitted gasket can spell disaster, he enjoys the feeling of liberation he gets from working with glass - a material in which things are always “going wrong,” and which has its own peculiar energy. Above all, though, making sculptures is “therapeutic,” a way of “airing them demons.” Some of those demons still haunt societies around the world. With the help of artists like him, perhaps they will start to be exorcised.

Emma Park is a London-based arts writer and podcaster with a focus on the fine arts, classics, and education | Urban Glass 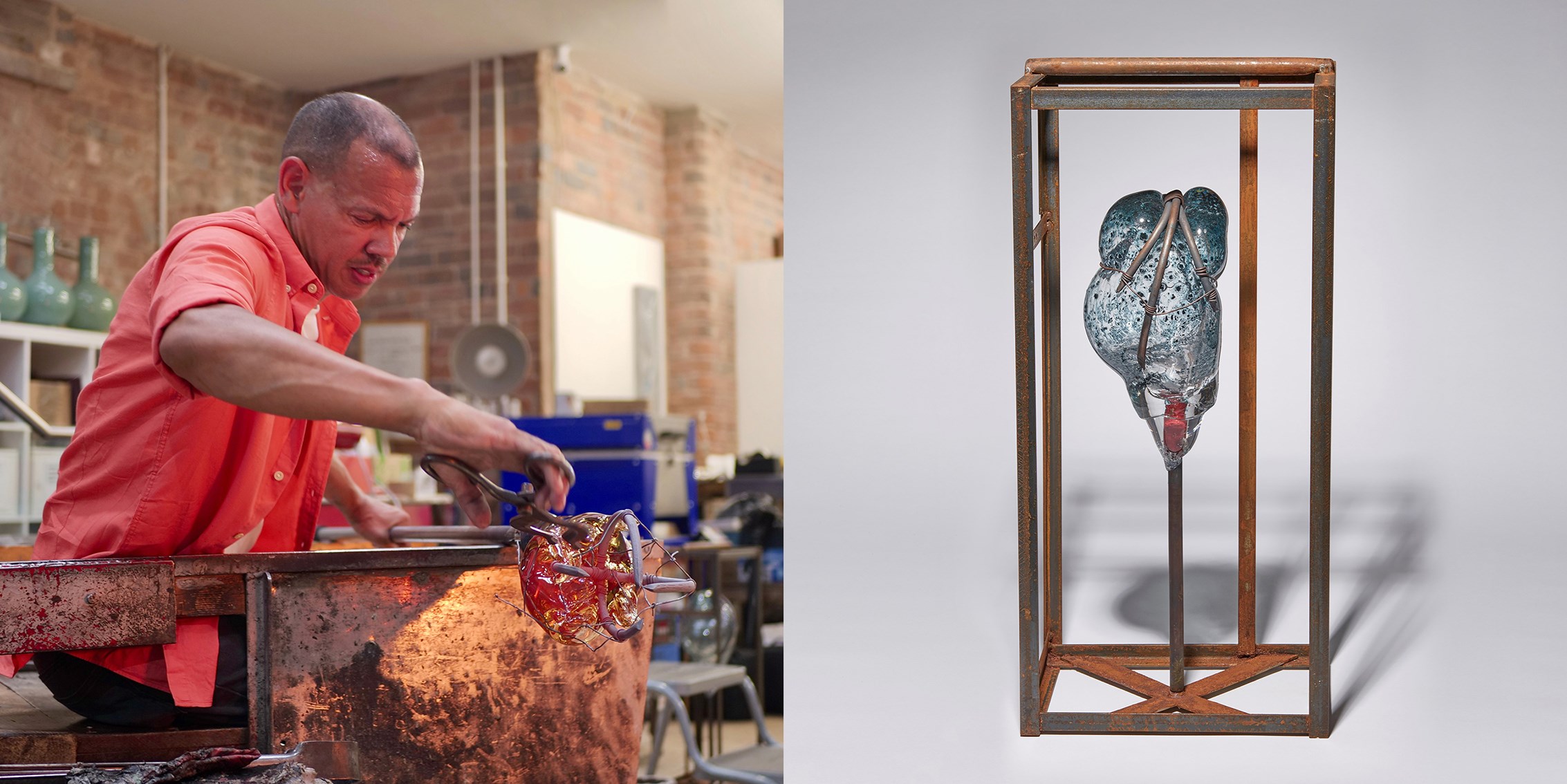